The Oxymoron that is Virgin America Customer Service 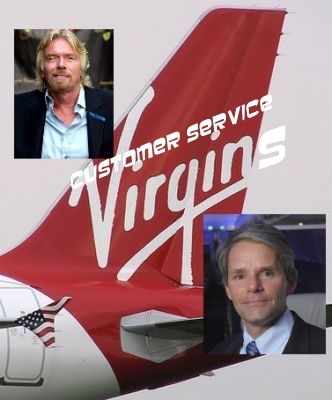 There, I said it.

I tried hard not to have to tell this story. I spent a lot of time giving Virgin America the opportunity to avoid what’s about to happen. Virgin America’s customer service department didn’t help me. Both Mr. Cush’s office and Mr. Branson’s office ignored me. Jill Fletcher, Virgin America’s Director of Social Media, ignored me, too, twice; I reached out to Ms. Fletcher via both LinkedIn and Facebook.

A couple of weeks ago, I was in Los Angeles for the West Coast Memorial Service for my sister, Dr. Barbara Yablon Maida. My fiancée and I flew to Los Angeles on Virgin America. We’d flown Virgin America before, as well as flying Virgin Atlantic to London as recently as a few months ago. I’ve always had great things to say about the Virgin family of airlines.

The airline business is a tough one. Most airlines are losing money, and I certainly forgive the fact that amenities on Virgin America today, unlike a few years ago, are entirely à la carte; I won’t make that a customer service issue.

But listen to this:

On the day before we were scheduled to return to New York—and just hours before the memorial service, so you can imagine my frame of mind when this happened—we got a call from Cathy’s mom. Her father was hospitalized, and we were told by Cathy’s aunt, a Registered Nurse, that we should get back East as soon as possible if we wanted to see him.

I called Virgin America. I explained the situation in detail. And the Virgin America Customer Service agent told me that while they could move us from the Friday afternoon flight we were scheduled for to a Thursday night red-eye , Virgin America would be charging me almost $1,100 in change fees and fare differences for the privilege.

It wasn’t an upgrade. It was the same class of seat, on the same route, 16 hours earlier, under duress, with that duress explained to the Virgin America representative. Flabbergasted, and as I said, already in a tenuous frame of mind, I thanked the customer service person and told him I’d get back to them.

On the way out of our hotel for the memorial service we informed the concierge that we were going to be changing our plans because of a family emergency. Apparently, customer service matters at The Peninsula Beverly Hills. it matters so much, in fact, that without us asking and without so much as speaking with a manager the concierge told us that we could check out as late as we wanted that evening and of course we wouldn’t be charged for the final night of our planned stay at The Peninsula. (footnote: and we didn’t check out until after 9 PM, meaning The Peninsula lost the opportunity to book our room, at all)

She even asked if we’d like her to try and speak with Virgin America Customer Service on our behalf. We gratefully accepted. She contacted Virgin, got exactly the same story we had, was clearly amazed, and then handled the rebooking for us.

I’m happy to say that Dad turned out to be in a less precarious position than it had first seemed, so that part of the story ends happily. But Virgin America’s Customer Service just got worse from there.

Last Monday morning I picked up the phone to try and talk some sense into Virgin America. I started in customer service, re-told the story, convinced the person I was speaking with that we weren’t people just looking for a way around airline rules, and her offer—I’m not kidding—was to refund the change fees of $100 per ticket “without the doctor’s note we usually require”. She refused to refund the $900 that represented “fare differences”, however.

by the way, I’ve received back only $100, not the $200 I was promised, so Virgin America Customer Service screwed up even that part of things.

We do customer service consulting here at Answer Guy Central; it’s a topic I know a bit about. We help our clients with business process, too. Keep that in mind as you read on . . .

I attempted to escalate to executive/presidential customer service and was informed that Virgin America has no such department. I was offered a chance to speak with the customer service representative’s supervisor, however. I accepted, and began again.

The Virgin America Customer Service Supervisor than explained to me that the reason she couldn’t do that was because the seats we had were of a different “class” than the seats we had originally been booked to sit in. This is called “a distinction without a difference”. And the distinction wasn’t that the seats were better or the service was better; it was that Virgin America has the seats coded differently. I pointed out that the only reason they were in the system differently was because they were “purchased” on short notice rather than a couple of weeks ahead of time.

She told me that I was correct, and that because of that the seats were more valuable. I explained that I understood that, in theory. But I also pointed out that the seats I was giving back to her for the flight sixteen hours later were also more valuable now than they had been when I bought them, and that Virgin America would be reselling my seats for more than I had paid—making it a wash.

And then, because she had nothing left in her arsenal, she lied. In a last-ditch effort to justify the manner in which Virgin America practices customer service, the customer service supervisor told me that my original seats would be put back in available inventory for the next afternoon’s flight at the price I had paid for them originally.

OK, maybe she didn’t lie. Maybe Virgin America simply misinforms or fails to train its employees. Maybe, just maybe, Virgin America actually re-sells tickets on a day’s notice or on the same day as a flight at the price they were originally sold at, just as a matter of principal. But while I accept that “Virgin America Customer Service Agents Are Poorly Trained” possibility, I’m skeptical about the other one.

And now, this gets really ugly.

What follows is an unedited transcript of the emails that went back and forth between myself, Frances Fiorillo, the person in charge of customer service at Virgin America, David Cush, Virgin America’s CEO, and ultimately Richard Branson. There’s a Virgin America Customer Service representative thrown into the middle of this, as well, who told me the same story that the customer service representative and supervisor had told me on the phone. And yes, I referred to my fiancée as my wife; I’ve found it’s easier than explaining relationships and fighting legalities.

The trail ends a week ago. Virgin America hasn’t replied. Not Richard Branson’s office, not David Cush’s office, not Frances Fiorillo or any of her people, not even Virgin’s Director of Social Media, Jill Fletcher.

Customer Service matters. I’ve mentioned before that the bigger you get the more likely it is that you’ll see your customer service department as a profit center rather than as an expense geared toward long-term payoff, and I’m truly sorry to see that not just Virgin America but it would seem the entire Virgin Group of companies has turned away from customer service.

Welcome to The Answer Guy’s Customer Service Wall of Shame.

Virgin America, are you listening now?

And, oh, yeah: Virgin America Customer Service is about to become a Search Engine Optimization play. Get ready . . .

Update, April 2013: Remarkably, if this story is true (and I can’t find any more references to it … oh wait, check the date), Virgin America is about to become Alitalia America. That would be funny; Alitalia is known for their <ahem> interesting approach to customer service by almost anyone who’s ever set foot on one of their planes. Nice one, Cranky Flyer!